Anyone who’s been in the Rory McCann fandom for long enough knows that he’s legendary for living on a boat. We’ve all seen photos of him on it. It’s a thing with him.

The earliest mention I have, so far, in my articles collection of Rory McCann owning a boat is from 2009 after he returned to Scotland from Iceland. I have a sneaking suspicion that if he was not into boats already before he filmed Beowulf and Grendel, he got bit by the bug while making that film. (If you watch it, you’ll see what I mean. There was a bit of sailing involved.)

I don’t know what kind of boat it was and he might not have been living on it. Sometime in 2014 or 2015 he told someone in an interview that he had the Hound’s swords on the wall above the front door in his house. House, not boat.

But at some point he definitely had a sailboat. It may or may not have been his first one. I call it Blue Boat, and here’s a photo of it: 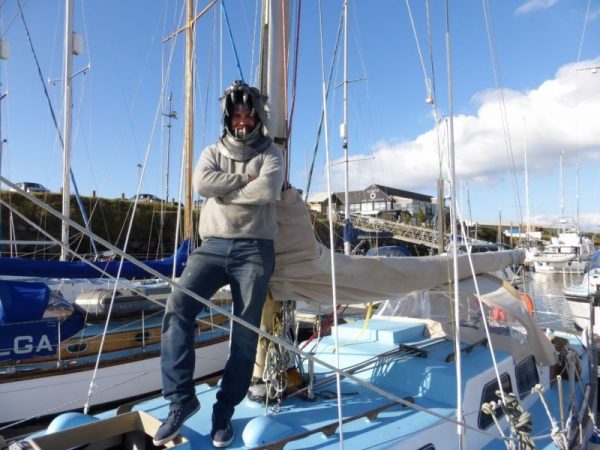 The eBay listing where he sold this boat is no longer live, but I believe that occurred in 2017.

His next boat I have long thought of as Wooden Boat and he was already working on that one by 2016, as I’ve seen in photographic evidence from that year. Thus:

The party line about Wooden Boat among fans seems to be that Rory had earned enough from Game of Thrones to finally buy a larger boat that he could actually stand up in without opening any hatches. I’ve seen the stats for this boat and, sure enough, he had exactly six and a half feet worth of vertical space inside it.

In January and February 2021 I started wondering, though. We fangirls were already aflutter with rumors about Rory possibly being married, and all of a sudden another fan, who also knew his boat’s name (we thought… keep reading), got hold of me to show me a sales ad they’d found on a website. To wit, an ad offering a boat with Rory’s boat’s name for sale.

But the ad was confusing. The boat wasn’t built the same year that we thought Rory’s had been built, the masts were the wrong color, and the interior didn’t look right. Plus, Rory couldn’t have been the owner of this particular boat because as far as I know he’s never been a yacht surveyor and in 2007, when this particular boat was most recently purchased, he was too damn broke to buy a yacht. The math didn’t add up.

At first I thought, okay, maybe Rory’s marina friend owned the boat and was just letting Rory use it in return for Rory doing renovation work, which would not have been out of character for Rory, who’s been involved in similar living arrangements in the past. A little weird, okay, because by the time we saw pics of Rory on Wooden Boat he was not poor anymore, but Rory has always marched to the beat of his own drummer so anything was possible, I supposed.

So I put a bunch of rationalization here on this page about how maybe Rory wasn’t living on a boat anymore (and wouldn’t it have been fucking cold in winter, anyway, right there on the water?) and that, if he’d really gotten married the way at least half the fandom seems to think then it would have made sense to get off the boat, and then I moved on with my life.

Well, currently I’m tinkering with the site again and had another look at this page (see date below) and decided to dig around some more. I can’t always find out what I want to know with my Google Fu, but I’ve had some pretty interesting breakthroughs over the years on various subjects, so I thought I’d try my hand and see what came up. If anything, maybe some fucking clarification.

Everything cannot remain a mystery about my dude forever, y’know.

And then finally I had an epiphany.

This is a post from a Facebook page about wooden ships in general. It discusses the Dorus Mhor ketch which was designed by Laurent Giles.

Before you yell at me: We especially nosy fans all assumed Dorus Mhor was the name of Rory’s specific boat.

I don’t think so anymore.

I think it’s the name of Rory’s model of boat.

The thing is, I had seen this phrasing about the boat before: The Dorus Mhor ketch was designed by Laurent Giles and only 6 wooden examples were built. SIX boats named Dorus Mhor. I had assumed that meant there were five other ketches like Rory’s and they all had different names. But no. I had misread the information. They are ALL Dorus Mhor.

It’s like the naming convention for the Chevrolet Corvette: Laurent Giles Dorus Mhor.

Goddamn, I’m an idiot. A lot of us were. Here we were, those of us who ran across this information over the years, and we thought we were protecting Rory and it turns out we were doing the equivalent of thinking his make and model were his license plate number. He will laugh his ass off if he ever finds out.

Long story short, no, that ad was not selling Rory’s specific boat. It was selling another boat with the same model name.

Does Rory’s boat have a particular name that isn’t the boat model name? I have no fucking idea. I wouldn’t tell you if I knew, because that really IS a bit like a license plate number, I would think. Anyway, we already know he was docking at Troon Yacht Haven in 2017 and we have seen lots of photos of him with his boat, so it would be nothing for a really enterprising fan to find him if he’s still there. Blame the media. I’m not going to pretend that’s a big secret when you can find that information online.

Do me a favor, though: don’t stalk him, okay? We want him to continue to enjoy having fans. Please.

I don’t know if he’s still at Troon, anyway. I don’t even know if he’s still living on his boat. He is not as open about his life as he was twenty years ago, and he has his own reasons, and we can hope that sometime soon someone will interview him and ask the right questions so we can catch up with what’s going on with him, but of course we can’t count on that. So we’ll have to just accept that we might have to keep wondering.

In the meantime, mystery solved. I would not be at all surprised if a lot of you got there before me but, in case you didn’t, here you go. Nosy Fucker strikes again.