If I could sum up Rory McCann’s love life in one sentence, it would be: “I don’t know, and you don’t either.”

Thanks to a nosy streak a mile long, I can say I know a few things about Rory’s love life in general, based on the evidence.

1. I know that when he served as custodian of Rowallan castle, he had girlfriends over. Apparently a common complaint was that it was “too much like camping.”

2. He had a girlfriend named Hazel, a doctor, from about 1998 until at least early 2005. They seem to have met when he was custodian at Rowallan Castle (I’ll go out on a limb and guess she didn’t mind camping), and seem to have cohabited for most of their relationship, probably in Glasgow. However, they were over by November 2005. That’s the month he featured as an eligible bachelor in some sort of Scottish special periodical.

3. I know he was seen in public with artist Tracey Emin in 2007. Their posing for one of the photos taken that night is interesting. However, given other evidence, the photo may be a red herring; Emin was known to be dating the other guy in the photo by the following year. In any case, Rory never mentioned her in any of his interviews that I’ve seen.

I grant you, he wasn’t asked on the record about relationships in most of the articles I’ve seen. And there’s room here to wonder if he ever asked his interviewers to not bring that up. So hey, there still might have been periods in which he was more secretive about the whole thing. Given his general track record, though, it doesn’t seem likely.

In October 2020 rumors started flying, which I missed for several months due to past interpersonal issues with the chief rumor-mongerer, that Rory had gotten married. Someone I’d interacted with via Facebook for well over a year informed me that at the least he’d been in a long-term relationship.

But the math is weird.

In June 2019 he was invited by Robert Plant to attend Plant’s concert in Norway. We know from fan photos that he accepted the invitation and sailed to Norway on his boat accompanied by his friend from the marina in Ayrshire.

We also know that he invited at least two random fans on board his boat for drinks while in Norway. 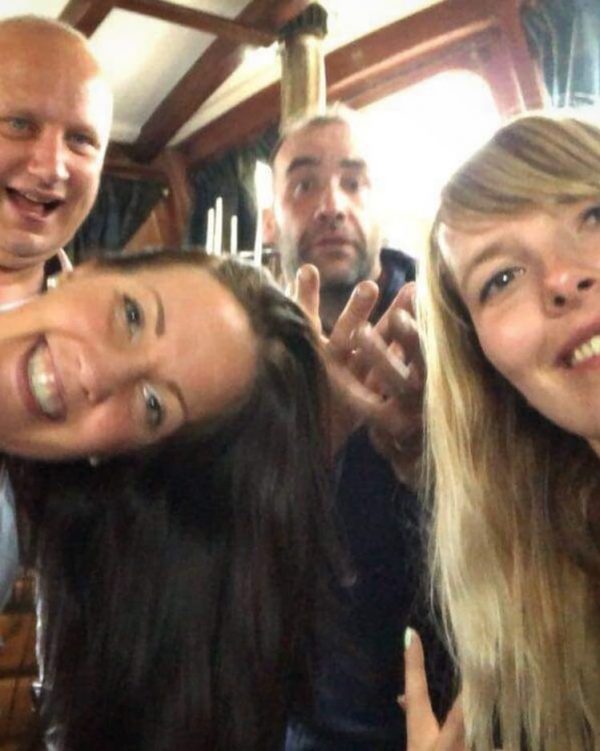 And there have been other things he’s done and places he’s gone in between then and now where he’s appeared all by himself. At most he might have taken his mum to the Jumanji: The Next Level premiere in London in December that year, but I am only guessing that based on one photo I saw on Instagram, and I am very probably wrong, though it would not be out of character for him; he’s taken her to premieres in the past.

Everyone does relationships in their own way but, for instance, no one except the most die-hard fans of Tyrion Lannister actor Peter Dinklage knows jack shit about Peter’s wife, and he still turns up in public with her in random places and takes her to premieres. And Rory has taken his own mother to premieres by habit. As long as he’s stayed single over the years, I feel like he’d have to be head over heels for a woman to decide to commit to her, which would mean he loves her at least as much as he loves his mum. No way in fuck would he leave her at home. It just does not ring true.

However, he could have taken a putative girlfriend or wife to premieres and then not allowed her to be in the photos, either by her request or by his proactive insistence. This is not outside the realm of possibility. We probably don’t know what his mother looks like, and she’s appeared in public with him multiple times over the years. She has definitely never been in premiere photos with him, to my knowledge. So there’s wiggle room here.

But my brain keeps going back to the Norway trip. Again, that was June 2019. The marriage rumors started in October 2020 because a restaurant owner in Portugal claimed to have served Rory and his wife. Let’s say he’s right and Rory is married, one of three possibilities is in play here:

(a) Rory didn’t meet the future Mrs. McCann until after the Norway trip.

However, this puts their relationship at roughly fourteen months’ duration, at most — the entire relationship, not just the marriage — by the time he turned up with her in Portugal.

For it to have lasted that long, though, he would have had to have met her immediately after getting home from Norway. Robert Plant’s concert was the weekend of the June solstice, and Rory was sighted in Lerwick, Shetland in mid-May, though I don’t know if that was the same trip. I know he sailed to get to Norway, though, so let’s say he was gone from his usual haunts for at least two weeks, putting him back home in maybe early July, if not later.

For those who cannot math (including me — I way miscounted the months when I first wrote this, and have since edited), fourteen months is less than a year and a half. It’s more like a year and a sixth. And remember, that’s the best-case scenario. If he met the future Mrs. McCann after Norway, it might have been less than fourteen months until the Portugal sighting.

(b) Rory knew the future Mrs. McCann before the Norway trip, but didn’t get romantically involved with her until after he got back.

(c) Rory was in a relationship with the future Mrs. McCann by the time of his Norway trip, left her behind to go to Norway, and then invited strange women aboard his boat for drinks.

Want to know what I think?

I think option C had best be off the table because I don’t care how jealous I would be if I found out he had someone — no comment — he’d better not treat her like shit, because I’ve been through some relationship shit myself and that nonsense would completely destroy him in my eyes. I’d be done. End of. I don’t choose to like artists/performers solely on the basis of their personal choices, but we all have to draw a line somewhere. You could argue he had a chaperone in Marina Friend, but how often does a dude-friend “chaperone” actually do his job well?

So that leaves us with options A or B.

Option A would be weird. I can’t see him taking this fucking long to find a good relationship and then throwing it away being impulsive starting something serious with her when he barely knew her. There is a reason, or there are multiple reasons, that he’s been single for so long. The two most likely possibilities are either he got really badly hurt, maybe by Hazel (given his complete radio silence about any women he might have been with even briefly since then, other than that Scandinavian woman who invited him to go skinny-dipping), or he’s spent all this time having flings because he was having too much fun as a bachelor to bother with anything committed. In either case your typical guy, in my experience, is loath to change his situation.

Which would mean it is highly unlikely he would get married after fourteen months knowing some woman. Or less.

BUT. On the other hand, I know he is perfectly capable of doing impulsive things. He is the kind of guy who will drop two hundred quid to pay for everyone’s drinks when he’s down the pub. He is the kind of guy who will rocket down a snowy mountain, in the fog, on his ass, because he doesn’t have proper cold-weather gear and wants to get down the mountain NOW to warm up, even though it’s foggy and he can’t see what’s in front of him and could have racked up another 70-foot drop and not come out of it alive this time.

He really has done both, in fact. Sooooo… I don’t know how I feel about this one, ultimately.

Option B seems the sanest option. It’s reasonably possible, and if he’s married this is my favorite theory as to how it happened. If this is how it happened, he was telling everyone he was single back in 2014, so we’re talking a good half-decade if not more in which he had time to figure things out with whoever this is.

This all, of course, assumes that Rory is actually married.

I saw, on Instagram, the Portugal restaurant owner who claimed in October 2020 that Rory was married, but by the time I got to the conversation he had deleted his relevant statements on that subject. My impression of Portugal thus far is that people are fairly traditional-minded there, though, so all he’d have to have done was see Rory at a table with a woman to have jumped to conclusions. I don’t know what the owner asked or what Rory said, and no one else knows either. I do know from experience that even here in the States, most people who see a man and a woman together in public who seem fairly close together in age will assume they’re a couple. When I lived with my daughter’s father, we’d go out and do things together (not date, we were over by then, but just normal everyday Doing Things kind of stuff) and people would assume he was my husband. It was awkward trying to explain the situation and I finally gave up. Maybe the restaurant owner just started in about “you and your wife” and Rory didn’t feel like giving him his life story (gee, that’d be a first, these days 🙄), so didn’t correct him. You never know.

On the other hand, given all the times Rory has gone public about his relationship status both when he’s had one and when he hasn’t, why would he keep quiet about it now? He’s got to know the fangirls wonder about him. He does not strike me as a cruel man. Nothing I have heard about him from people who’ve met him would seem to indicate he is, either.

Also, a marriage license is a public document, and marital status is not considered private information. Making marital status public is a way of preventing bigamy, incest, and (accidental) adultery. It is in society’s interest to know.

If nothing else, if he’s swanning around Scotland with a new Mrs. McCann, as some people seem convinced he’s doing (according to fan rumor, he was spotted with her in Paisley at some point in the year or so leading up to this fan-scandal), wouldn’t the press have noticed by now? He’s been one of Scotland’s most eligible bachelors for well over a decade, hasn’t he? Rory meeting someone would be NEWS, at least in the entertainment media. And yet I occasionally search Google and… nothing.

So in the end I come back to the best answer I can give to what’s going on here:

I don’t know, and you don’t either.

Let’s just leave it at that for now. We’ll find out eventually.