This post really would be better off on a different site that I have yet to get going [kicks self], but this is tangentially related to Rory and his career and it’ll at least get eyeballs on it, so why not.

Let me preface this with an assurance that I am not making light of the sacrifice of our war dead. It just so happens that one of the holidays set aside to commemorate them was what prompted this post. It is coincidence, nothing more. If we had some other holiday that called for turning everything red, I’d have gone with that instead.

(I say “we” as in the West, and particularly the Anglophone countries, though of course Remembrance Day specifically is a UK/Commonwealth day. Our Memorial Day in the United States falls in May. Our Veterans Day coincides with Remembrance Day.)

Since 2019, when I really got hooked on Rory, I’ve gone and studied up about Scotland because I kept hearing references to placenames in his interviews and got really curious. One of my early boyfriends had Scottish ancestry*, but I never got into it then; Americans having the ancestry is of course nothing like current citizens living the culture, anyway. All I knew was Scots wore kilts and made claymore swords. Ex-Boyfriend’s family owned one, in fact. But I didn’t find any of that particularly compelling. I did find Rory talking about it compelling, so undertook a sort of self-education on the subject.

Well, as I went along I started recognizing words and names from, of all things, George R. R. Martin’s A Song of Ice and Fire book series. You will remember, I hope, that this is the source material for the TV show Game of Thrones, which of course really launched Rory McCann’s acting career in a way that even The Book Group hadn’t quite accomplished (newcomer BAFTA notwithstanding). But seriously, even the map of Westeros makes me think of Scotland or else Great Britain (the island) as a whole. It doesn’t wholly map to either, but if islands could be genetically related to one another, they’d be kin. The name Westeros derives from Wester Ross**, a region in Scotland. The Great Shepherd, the god of the Lamb Men, is a translation of Buachaille Etive Mòr***, the Great Shepherd of Etive, a famous mountain in Glen Coe. The northmen’s habit of referring to clan leaders as “the,” just as they referred to Eddard as The Stark, was lifted straight from the Scots habit of referring to clan leaders or kings as “the” Campbell or “the” Bruce, etc. Speaking of the Bruce, I find it well past coincidental that the Baratheon who ended nearly 300 years of Targaryen rule in Westeros was named Robert. Little things like that. The more you learn about Scottish culture and history, the more you see it. When you learn that Martin spent some time living in Scotland, you really can’t unsee it.

Accordingly, when I started seeing photos of Edinburgh Castle and made note of its large drum tower and the way it just seems to kind of hunker down over its high hill, I wondered whether it was the inspiration for the Red Keep in King’s Landing.

Now that it’s being lit up red, I dunno. You tell me. 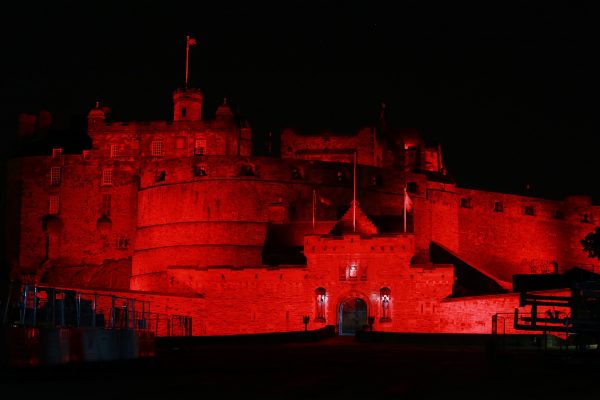 You don’t really see this in the show, but in the books the Red Keep is so named because it’s made of red stone.

I’d love to pick Martin’s brain and see if I’m right, but of course even if I could I wouldn’t because that man is too distracted already. But perhaps at some point I’ll stumble across an interview or three that confirm my theory. I’ll be stunned if I’m not right.

—–
*No, I don’t have a type. When you live in the South, basically, throw a rock and you’ll hit a Scots-Irish person. They’re everywhere there. Appalachia too.

**Pay attention to how Sandor Clegane says “Westeros” in the TV series. Rory, as a Scot, knew about Wester Ross long before he ever heard of Westeros, and old habits die hard.

***If you want to know how to pronounce this, watch the first episode of The Book Group and listen to Kenny talk about his trip to Glen Coe with his brothers.