I got a Google Alert on my phone about Rory (well, he’s the only one I’ve got set), and upon further investigation I find an article about movie props that actors have kept, including this gem. Pardon the sloppy screencap: 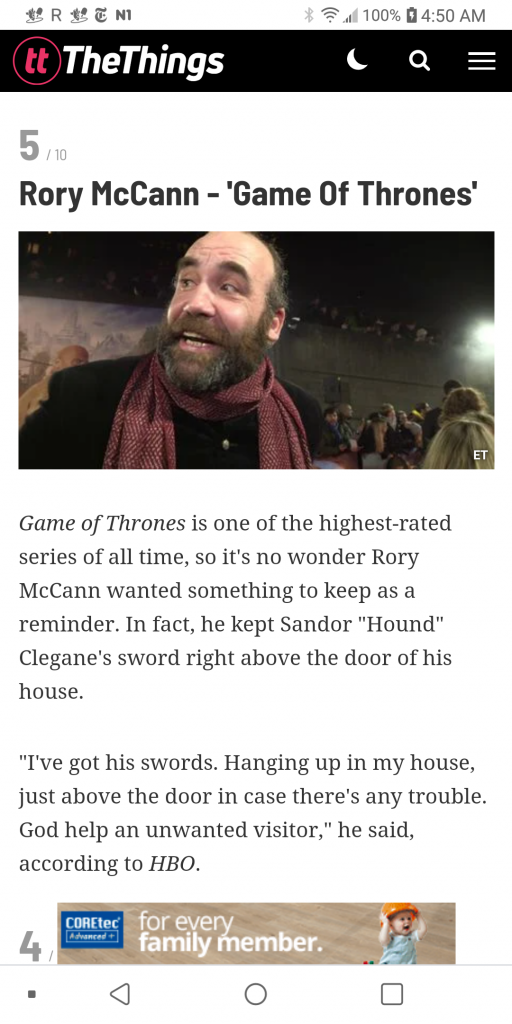 WAIT A MINUTE, WHAT HOUSE

I have no way of knowing, without being a nosy bugger and emailing the author to ask, when Rory made this statement. The photo they included is very likely from his Jumanji: The Next Level premiere in London last December. The quote itself could be from any time between 2010 and now. Logically it should be a lot more recent — why keep a prop if you are not done filming — BUT, props for major shows and films are generally massively expensive and studios are loath to part with them. They could feasibly have let Rory keep Sandor’s sword during his off time with the understanding that he’d bring it back to work. But who knows.

Without wanting to stick my nose into Rory’s street address or anything, I am dying to know when he decided he “want[ed] a home base” after all. Denying it previously could have just been something he said in frustration at his slow career pre-GOT, though. I know he’s got a collection of armor pieces and swords from lesser-known works he’s acted in, and maybe he was tired of having no place to put them.

Or! Maybe you romance junkies are right and he did get hitched. We do know that he has always connected Having A Long-Term Relationship with Settling Down And Getting A Mortgage. Or buying the whole damn thing outright, maybe, by now.

Would explain the uptick in voice work, too.

Anyway. I’m writing this from my phone and I need to go to bed. (Unless I decide to pull an all-nighter. I seem to be moving in that direction.) May revisit this later. Perhaps I can dig up his quote somewhere else to at least pin a date range on it. We’ll see!