This is less a site admin thing than a fandom thing, but I have to share, because it delighted me.

I was in a conversation with someone on a social media site because I had posted a pic of my dude in his most famous role. This is not the pic, but I’ll add it for color. 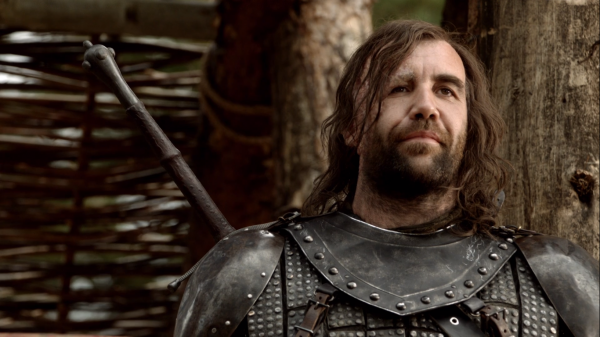 This person was quite impressed with Rory McCann’s performance as Sandor “The Hound” Clegane, and said so. I remarked that Rory had seemed slightly awkward to me in the first three seasons and pointed out that he’d only had one acting seminar for formal training, but that you could tell he was talented anyway because his ability really came out when he had a good director, and he had been blessed with several in his time on Game of Thrones. That he finally pulled the director for the Red Wedding episode who had a little talk with him and then Rory came into his own from season four onward. Boom.

Conversational partner was surprised by this and said they’d thought Rory was acting slightly awkward in the first three seasons on purpose, that it was all from having the scars on his face and feeling out of place because of that, but eventually he developed greater confidence and his demeanor changed as a result. (I’m paraphrasing.)

I said Rory would no doubt be delighted to hear that, and that for all I knew he had been doing the semi-awkward bit on purpose, you never know.

Frankly I only noticed the awkwardness after watching the show a few times and watching other things Rory had been in. I doubt most people saw the pattern. But if they did, maybe they made the same assumption as this person, so it all worked out anyway. I mean, Rory is not a fan favorite for nothing.

I think that is so fucking cool. Had to share. Don’t dare hope the big man will see this, of course.