Well, I have still not gotten to the next Rory episode of The Irregulars. Part of the problem is I don’t watch my two episodes (this and The Walking Dead) every single night, but I’m also only getting that one episode per show every night. I tried the “bingeing” thing ages ago and it was all fine and dandy when I had more time at night to do it, but now I don’t, and I already stay up too late.

But! I did a thing unusual for me in that I went and looked at Rory’s tag on Instagram briefly, and someone else has gotten to that next episode and screenshot already. So I know we see him in Bedlam in his backwards dinner coat, bless his heart. Here is hoping they don’t kill the character off.

I’m thinking that the thing with the sort of plague mask/ bird head that Jessie keeps seeing in her dreams is not the Bird Master or a dream version of him but someone else entirely, so that may not be Rory in a mask. I will have to go back and look at IMDB when things have gotten far enough along that the cast list is accurate. We saw with that Jumanji movie he was in that the early version of the cast list sometimes isn’t accurate and can get edited a lot. Sooooo I may not be hanging on to Weird Bird-Mask Creature’s screencaps forever, depending on what I find out. Though it’s possible they had Rory dress as that critter even if it’s not Arthur or Arthur’s magical self per se. I mean, that sucka is tall. But is it Rory-tall or is it Typical-Monster-Actor-tall? We’ll have to see.

Also, I had gone back and watched the first episode with the subtitles on and that poor man, Rory’s character Arthur… I had wondered what was up with the wife after their daughter’s stillbirth. I knew she’d be grieving, that’s a no-brainer, but she was SO bloody there on the bed and her color was all wrong, but on the other hand she was sitting up, so I didn’t think twice about it. I figured maybe by some miracle, she might have made it. Nope. Arthur was talking to her when he used the Ouija board. So basically the staff of the ward where she had the baby were unkind in not letting Arthur see the baby’s body, and just left the mom to suffer and die because in those days they wouldn’t have known what else to do with her and hell, half the time obstetric staff are not kind to birthing mothers now. One wonders what is the use of an obstetric ward when one would obtain about as much kindness giving birth outside in a ditch, but never mind. (You might have guessed my two experiences could have been better. I am not alone. Ask tennis player Serena Williams about her fun experience sometime.) ANYWAY. So you have that unkindness and then you have the collective noun for ravens, an “unkindness.” So the title of that first episode was a pun, if a serious one.

I haven’t fully decided what I think of the show. I will say it’s compelling, and not just because I want to see Rory in it again. I can’t quite wrap my brain around the very modern music soundtrack, I very much doubt the UK had any black dukes in Victoria’s day, and they made Prince Leopold rather more handsome than he actually was in real life (yep… Victoria had a son named Leopold. Spoilers: He lived to age thirty), but it’s an interesting take on the whole Sherlock/ The Irregulars mythos. Considering I have never read the original books, and all that.

But I will say I rather prefer the characters in BBC’s Sherlock. Yeah yeah, I know. Whatever.

Off to bed! I might actually get there before 4am. We’ll see. Dun dun DUNNNNNN…

[edit] So guess what happens now when someone searches “rory mccann girlfriend”? 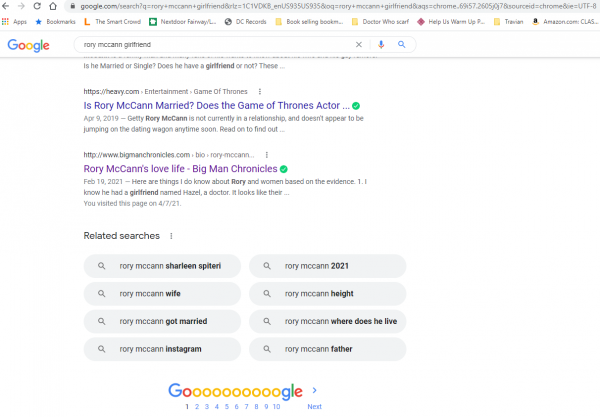 I noticed it was a popular search term when looking at my Visitor Traffic plugin. Out of curiosity I went and looked it up. I guess this is new pressure to keep up with the info? I can’t promise anything though. I would need a direct line to the big man to have anything that I’d consider trustworthy and, well, I almost did once upon a time, but not quite.

But! If I ever do run across anything I think is valid, of course I’ll edit that page about his love life. I want pages like that to be current, not to have info on them from ten years ago that I never bothered following up. The point of this site is more collecting than scooping, but even I have my limits.

So we’ll see how that goes. And now I really AM going to bed. Ni ni y’all.