I did some more poking around on Instagram last night, curious to see whether a certain status quo was still in place and I am sorry to say it is not.

Back in January 2020, the week of my birthday, to kick off a WONDERFUL year… 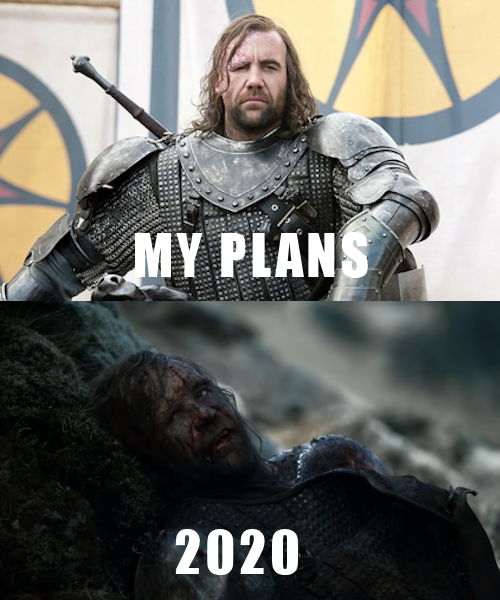 If you haven’t seen the following stills, that’s Sally-Gay on the right. I know because Lena Heady originally posted this, and because she linked to Sally’s IG at the time, and Sally herself had a userpic up for a short time of herself helping Rory with his costume for the Cleganebowl scene and she was wearing the exact same hairstyle and shirt. Simple enough to figure out. 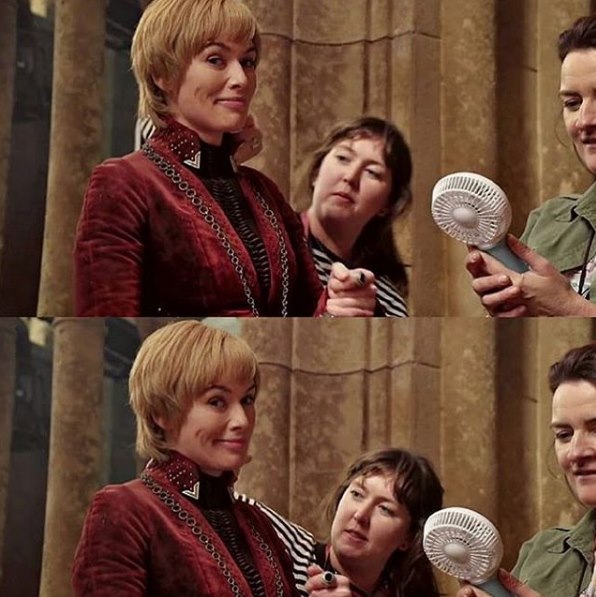 Sally had started following me about a month after I began the account, and it mystified me because I hadn’t even put up a pic of Rory yet, and she was following big accounts like Hound’s Lair and I was like, “okay, why me?” but I wasn’t going to look a gift horse in the mouth. I didn’t announce it, I didn’t message her, I just moved on with things.

I was sad when she went poof though.

And then I was looking at Marina Friend’s IG one day some amount of time after that, and somehow something clicked and I realized Sally was still on IG but not under the same name. I won’t say what her “new” tag was, and I’m not clear whether she simply changed her account name or started all the way over with a new one. Either way, I could tell it was her by some of the userpics she used, which incorporated her kids, who are little gingers (well, at least one of them) and sort of stick out like a sore thumb even if I couldn’t pick them out in a lineup. There was another way I figured it out but, on the off chance I was one of the rare birds who caught that detail and she might try the tactic again later, I’m keeping mum on that one.

And she was there for a while under that account name, but now she’s gone. If she’s still mutually following Marina Friend, she is very well-disguised. I haven’t figured it out, for sure.

If I’m given to rank speculation, and you bet your ass I am, I could guess she’s gotten off IG entirely because work has her busy or for some other reason, or maybe she just decided IG wasn’t as fun as she’d hoped it would be or maybe other Rory fangirls had found her and weren’t being polite and leaving her the fuck alone. The woman’s got kids yet to raise and doesn’t need to be left constantly fearing for her own safety, y’all. I want to believe she’s simply busy, but I’ve seen Rory fangirls at their less-than-best so I’m gonna leave that an open-ended question.

It occurs to me sometimes that I could probably leverage my status as owner of an unofficial fan site to ask questions of people who know Rory or even, perhaps, to arrange some sort of interview with Big himself via his agent.

I’ve thought about it.

So far, I’m really not feeling it.

Hard to explain. On some level it’s an emotional issue: to wit, I am a gigantic chickenshit. Bawk-bawk-fuckin’-bawk. On some other level, though, I feel like people have already asked the important questions of Rory-as-an-actor, and that’s likely all we’re going to get out of him. Whatever he’s wanted to say, he’s said. Unless he decides he wants to do an autobiography at some point I don’t see how we’re going to get much more out of him; I’m not sure what we’d even want to get out of him. “What was your favorite color at age seven?” Please. No.

(It was probably blue or green. Just a guess.)

Even if something’s changed like, say, what he’s looking for in a woman, because I know a lot of us wonder about that? (Don’t front. You know you do.) That’s problematic. I mean, what the fuck are you going to do with that information even if he shares it: pretend to be someone you’re not? Either you fit the criteria or you don’t, and isn’t that really for him to figure out, if he isn’t married or involved already (jury’s still out on that one, far as I’m concerned, until he speaks up one way or the other)? You already know (or believe) you like him. Give the dude some space.

That or anything else I could possibly want to learn about him at this point would be on the level of getting to know him on a private basis as a person. That has a 99% chance of never, ever happening.

So we’re just going to continue like this for a while and see how things go.

Anyway, any time anything major happens in his career he winds up interviewed by like 20 different outlets and they all ask him the same 10 questions. It becomes so predictable that you can tell he’s rehearsed some sort of banter to insert in moments of awkward silence. I’ll just keep an eye out and incorporate that stuff here. Really not a big deal. I think I’ve mentioned before that I collect, I do not “scoop.” Life is easier that way.

…Okay, I have stuff to do and I’ve wasted enough of this week. I’m down to the “bonus” episodes of season 10 of The Walking Dead and then I’ll start in on The Book Group and probably regrab the screencaps, as the image quality should be somewhat improved. I still haven’t figured out exactly what I will do with the screencaps I already have but I’m leaning in the direction of “put my favorites here, however I organize them, and then create zip files containing all the caps per episode or film to offer on Google Drive for free since I’m going to be outing myself anyway,” but that’s not a final decision and surely has its own drawbacks. We’ll see. There are days I wish I’d kept the IG up… but so far, they’re not that compelling. Oh well.