I was fiddling around on Instagram just now when I stumbled across the account of one Carol Smillie. (That’s the correct spelling. Straight from her social media accounts.) Most Americans will read that and go,”…okay?” Those of you in the UK may be smiling and nodding along. Weegies in particular.

You know her from TV presenting, if you know of her at all, but did you know another interesting little tidbit about her? 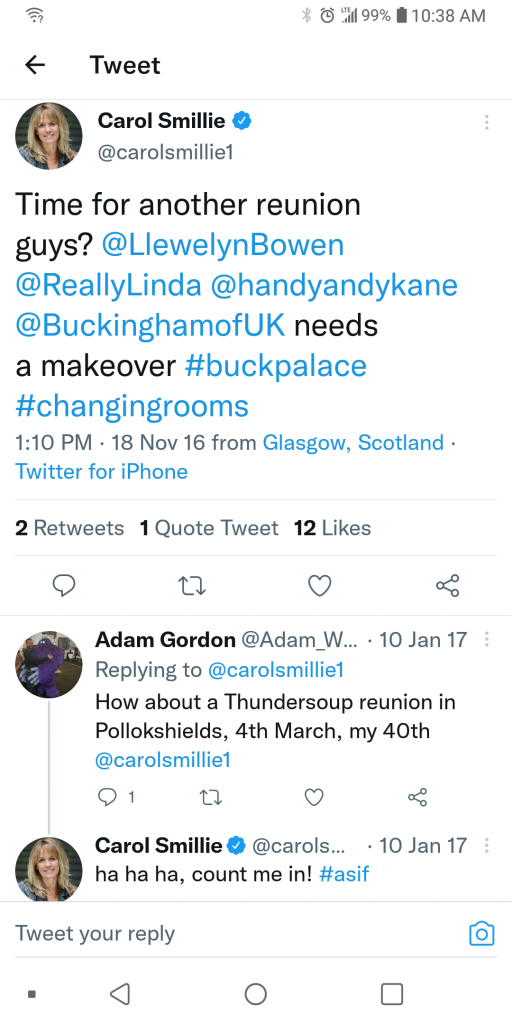 That’s right! She was one of the backup singers for Thundersoup! I had seen claims in that vein around social media, and this Twitter conversation in the screenshot confirms it.

There’s another interesting coincidence here. If you have seen The Book Group then you’ve likely seen the second episode where a young lady is a bit too interested in Kenny… to the point that she licks his face.

ANYWHO, while the character was a piece of work, the actress seems super nice. She even commented on the Facebook page when that was a thing.

AND, getting back to Carol Smillie, both she and this lady became wedding officiants.

Peculiar thing to have in common, but there you go.

I wonder if Rory ever still talks with either of them…