So, I posted one of these pics to my own Facebook a couple days ago… 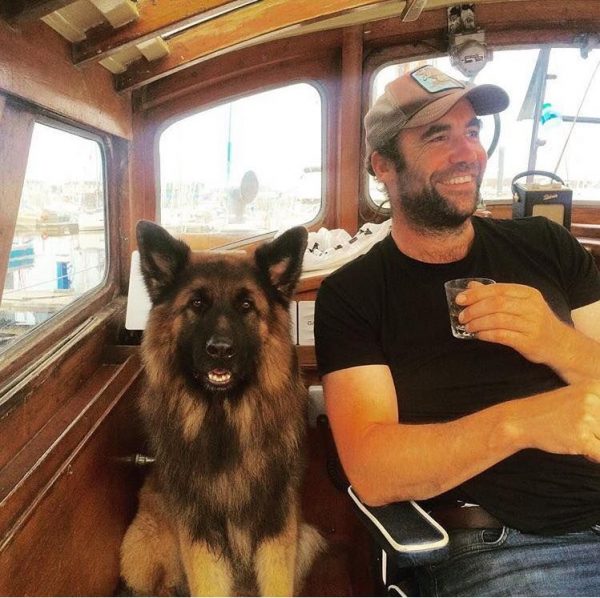 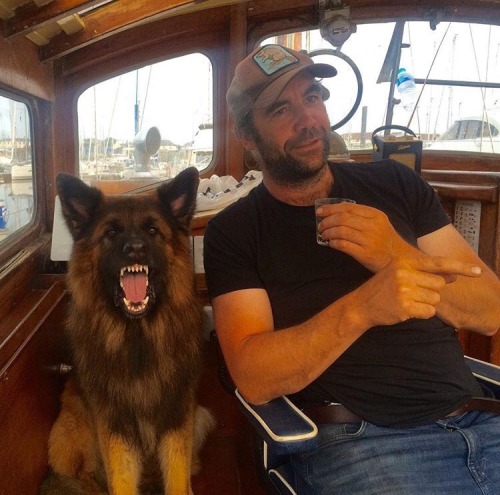 …and it got me thinking: What if the reason Rory McCann wants to do more voice work isn’t about his getting married. What if — stay with me, here — it’s because he has a dog and doesn’t want to have to board the dog or get rid of it?

Occasionally, when I look at videos on YouTube with Rory in them, I see someone in the comments speak of him as if they have personal experience of him. In one case it was someone who had seen him walking around Glasgow with a German shepherd. Rory himself mentions a German shepherd in this piece about his being custodian of Rowallan Castle. Based on context, I think the YouTube commenter and Rory were both talking about the same dog.

The dog in these photos, however, dates from 2016 or later because I don’t know when Rory bought his Dorus Mhor, but he had it operational (if it hadn’t been already) in 2016 and was living on it after that. Dogs the size of a German shepherd usually manage about a 12- to 15-year lifespan, Rory got rid of the one he’d had in the castle by 2003, and this one looks pretty young. I doubt it’s the same dog. So, unless this was someone else’s dog in the photo, it’s a pretty safe bet that Rory likes German shepherds and owns one again. He hated getting rid of the previous one. I could see him going “oh hey, I have MONEY now, let’s do all this shit I couldn’t do before!” I would totally fucking do that. I think most of us would.

A Hound and his hound. Fucking love it. Hope I’m right.

(He could also be married, of course, but in my experience spouses deal better with separation than animals do. I just like the idea of Rory having a dog again, though.)

I saw some interesting little bit about author Denzil Meyrick in the news over the past day where supposedly he saw an apparition on the side of the road while out driving. That bit I don’t really care about — clearly he survived the experience, so good for him — but the article also stated that the DCI Daley series is still in progress and that Rory is still slated to star in it as Daley. I had been wondering about that, and possibly some of you had too, so here’s more confirmation. Hoping for more detailed news soon, but not counting on it. I swear EVERYONE around Rory conspires to keep him some sort of huge state secret. I know more about Queen fucking Elizabeth (II) than I do about Rory. And she had actual bodyguards. And an army.

I follow a whole lot of Scotland-related pages on Facebook and lately, for some reason, they’re all obsessed with the Forth bridges. I have to actively fight the urge to comment on every single such post, “Yeah, and this guy helped paint them” [posts up photo of Rory]. I do lose said fight now and again, but I try not to be irritating about it.

I am GUESSING, as there are three Forth bridges and one was completed after his painting work, that the one he painted was the Forth rail bridge.

I still want to see that documentary that caught him singing. Hell, I’m always up to hear him singing. I’m up to hearing him reading from the damn phone book, but I think we’ve well past established that I have no damn life right now.

And speaking of which, yes, I do need to work on the site some more. This is a topic I frequently revisit and I have no doubt it’s tiresome by now. Meh.