Remember how Rory was going to attend Comic Con Scotland in 2019 and then didn’t, citing having to “work on his acting career,” but agreed to a private autograph session as a substitute and then proceeded to write his poor lovely hand off for something like 200 to 300 autographs?

The company behind the autographs claimed that they would photograph every single autograph signing as another proof of authenticity. Fucking good thing too because they never sent me my certificate.

I always meant to go back through and see if I could tell he was signing mine, but had never gotten around to it.

Well… I finally went through. 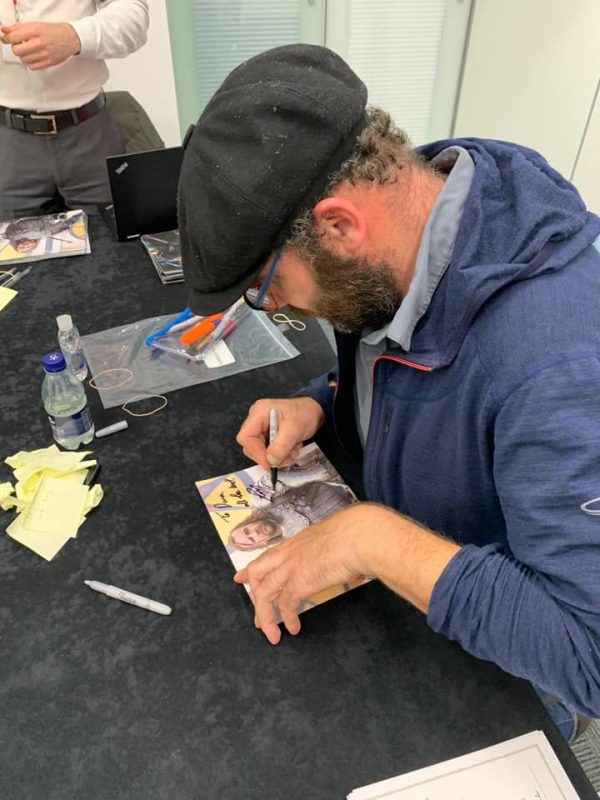 This is also from that same print he was autographing above, and he’s written the first letter of my first name. There were quite a few like that, so he didn’t exactly sign 300 autographs but it was a lot. Poor big man. Poor lovely hands. 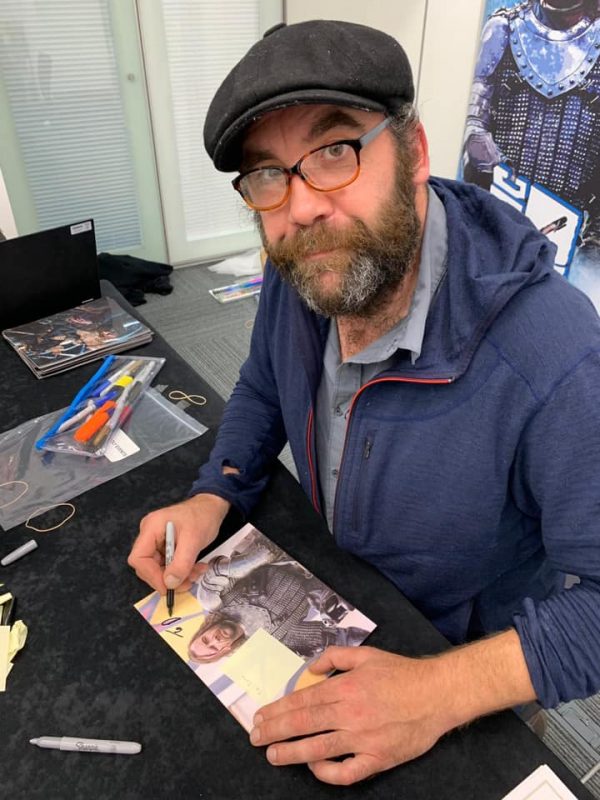 And lovely eyes. And lovely basically everything, SIGH.

I thought he looked tired when I first saw these pics and I still do, and it’s not a criticism — whatever prompted him to back out of the con, he did go more or less out of his way to make the fans happy despite all that and I truly do appreciate it. I hope someone took good care of his hand afterward, though. Grrr.

Also, I am in that weird place of recognizing parts of his wardrobe, like I can tell when he’s wearing his Hound audition shirt, and then there’s this blue denim-looking button-down thing I sometimes see him in, and he’s in that here. I am way too familiar with a man I’ve never met. I’m sure it would creep him out. I’m so sorry, my dude. I mean nothing nefarious by it.

(Also, we wear the exact same style of reading glasses. I wonder if he got his in a five-pair-for-cheap deal from Amazon like I got mine. It wasn’t on purpose, I just saw a price I liked and knew I wouldn’t get by with just one pair. Now I’m looking at him going “wait a minute.” Hahahahaha.)

I kind of wish I’d had more lead time in which to send him something truly individual, or that I could have thought of something clever to ask him to write. Considering that most of his autographs in this session were just his name, though, I didn’t make out too badly in the end. If I ever get another chance, and I won’t, hopefully I’ll have some actual illustrations I’ve done lined up as possible candidates to send. Stranger things have happened. I just don’t think it’s terribly likely. I think the whole fandom thing has plumb wore him out.

No I didn’t make any special effort to censor out my name from the photo. Oh wah, you can see my first name. Whoopty-doo.

I will most probably get both of these printed when I get the chance. I’m getting a lot of my digital photos printed to paper anyway, because having them digital-only makes me really itchy. I don’t want to lose Younger Kiddo’s entire childhood. So, one of these days I’ll get that sorted. His can go into little frames on my Rory shelf. Yes, I have a Rory shelf. Yes, there is probably something very wrong with me. Hahahahaha. But I can find all my Rory stuff, so there’s that.