If you ever see an “uncategorized” item under the category list in the sidebar (may be down below the content if you’re on your phone), that was just me forgetting to categorize a post. Which I did with one from August. Fixed.

When I first found out I had COVID I had bought a single test from Meijer. After I found out I had it I bought two more tests from Amazon and picked them up at a locker so I wouldn’t have to be around people. Took one of them several days after my first positive test and though I hadn’t had a fever in something like two days by that point, I was still getting that second line. So I put off testing again for a while. Well, I finally did yesterday and I’m all clear.

I still have a very little residual nose goop and cough but nothing to write home about and they hadn’t been bad to begin with, compared to how it gets when I catch colds. I do worry just a little tiny bit about whether I have any organ damage that hasn’t made itself obvious yet — that has been known to happen with this fucking virus, heart damage in particular — but the only other thing I’m contending with is loss of appetite and even that’s going away, and my sense of smell seems to be back too, most of the way at least. So until a problem actually crops up I’m not going to obsess about it. It’s more like a “hm, wonder if I…?” sort of thought. It’ll pass.

Still in that contact-center training class, which the last day is the 8th coming up. We’re going to work on resumes (CVs) this week. I’m being told I have some “really good” job experience, or “really impressive,” depending on which instructor you ask. Don’t know if they get paid to say that, don’t care. Just want to be employed very soon after. I am ready to stop tearing up my car and maybe, if I’m especially lucky, to be able to buy my own. Long story, yet one more thing Former House Male lied about; I’m over it. Soon as I get that mess sorted out he’s going to be left contemplating all possible meanings of the phrase silent as the grave. My silence, I don’t give a fuck about his. He wants me gone? Okie-dokie. I’m gone. Have fun knowing you’re a scrote, scrote.

I miss my kiddo one hell of a lot, but even that’s a minefield. I’m curious to see what will happen after early November, when she turns 18. I suspect her silence is entirely her idea, but if I’m wrong, after that date he won’t be legally able to shut her up. Nevertheless, I’m waiting on her to make the first move, which I have already told her more than once. And I will not be dwelling on it any more than I want to dwell on whether I’ll drop dead of COVID heart damage six months from now. Nothing I can do about it. Done deal. Only thing to do is live until I can’t.

Moving on now. You didn’t come here for my soap opera. I just like to let people kind of know what’s going on. I don’t have many folks to talk to these days.

More actually relevant to this site, I’m mulling over what to tackle first because stuff needs worked on. I can’t put a LOT of work into it just now because I am not out of the woods yet. I’m a little disgusted with myself, though. I’ve been having this song and dance with myself since before the big blowup a year ago. (Yes! It’s been a fucking year! I KNOW!)

One thing I wish I could do, if I weren’t so slow at drawing, is you know those rotating images on the front page? I thought it’d be cool to have some images from his work, but draw them instead of using screenshots. Who am I kidding, I’m too slow. It’s a nice wish-list item, however. You never know. I might manage it. Just not anytime soon.

In the meantime I’m almost done watching The Adventures of Merlin on Tubi (a few Game of Thrones actors turn up in that, by the way, including the guy who played Davos Seaworth, and he sends off a message by raven which made me smile), so after that I might try The Book Group again. In my not-so-humble opinion that show really is Rory McCann at his best. Rocking that young Sean Connery look, fucking beautiful voice, and even his character’s quite likable. It adds that certain… something… knowing the character’s based on him. Know what I mean? Yeah, you know what I mean. Shaddup. Anyway, I had started TBG when I was still down in Louisiana but with Senior Chief Grumblepants judging me every time I stayed up even a little bit late, I kind of let it fall by the wayside. I don’t have that problem now. Let loose the Watchers of Rory. Or this one, anyway.

I do kind of miss posting up my screenshots with my award-winning (not) smartass commentary. It occurs to me I could just do that here, as blog posts. That’d have to be a lot more interesting than tales of the colossal failures in my personal life. I think it’d be, anyway. Curious to see whether I’d produce better screenshots of TBG now that I have the proper DVDs. Previously it’d all come from Tubi. I even have a dedicated UK-specific DVD player now. HA.

And since I love you all, or at least the big man, let’s add a photo to this post for once. 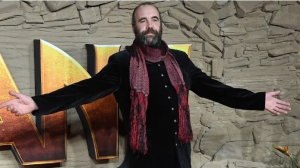 OMG HE IS VELVETY AND CUDDLY AND I WANNA HUG HIM AND PET HIM AND [record scratch] wait a minute isn’t this supposed to be a family-friendly site? Uh. Never mind.

—–
*Edit 03 October 2022: My brain got dates vs days of week twisted around for October. I am not actually sure now when the last day of class is. I don’t think it is the week beginning today (if you start your weeks on Mondays); I think we have one more week after this. But we’ll see, I guess.