I think I’ve mentioned here that I follow a lot of Scottish-themed Facebook pages. Today, one posted this photo. 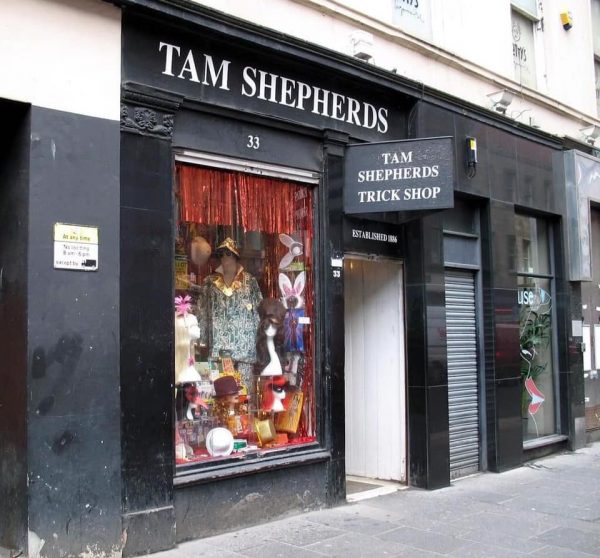 I thought, Hm, I wonder if this is the shop Rory visits? Did a quick search on here with the word “prank.” Sure enough! That’s the one. Tam Shepherds Trick Shop. Queen Street, Glasgow. Hope it’s still there if I ever visit.

I wonder if Rory still buys stuff there? I speak of it in the present tense but who knows, really? It seems like he has gotten more shy in the past decade about talking to the media about basically anything in his life. But it’s fun to learn these little things. He’s such a fascinating person.

I don’t think I would actually run into him there, though it’d be fun to have that moment of, “oh hey, this is a shop Rory likes.” I am curious to see what all they sell. Closest we have to a joke shop where I live also sells gifts and vintage toys, so I don’t think the pranks are the main focus. And I’ve never been to it because parking downtown is a pain in the ass. Maybe one of these days I’ll hit the park and ride, which at least is free and easy to get into, and catch a bus downtown instead. Dunno.

In other news, we finally dealt with the refrigerator issue, more than a month after it first became a problem. I said I’d have to put the kitchen back together afterward and, for the most part, I’ve been proven right. And then next month we’ll be back to the nonsense. And with the virus resurging in city populations I also have to deal with the teenager’s anxiety ramping up alongside her father’s being a general assclown. But I’m also making plans to get into a lot better situation, so there’s that. I just have to be patient for another roughly year and a half, that’s all.

Probably will add some more pics to the front page soon. May weed a few out that don’t really show up well on a phone, and it’s just as well because I feel like maybe there will be an upper limit to how many photos the theme will rotate without choking. But it’ll be fun finding out what that limit is, I suppose.

I’m going to give The Book Group a rewatch soon. Reasons: One, it’s one of my favorite Rory works. His Kenny character is absolutely darling and I want to jump his bones. Two, I’m hoping for better image quality to redo my screencaps. YES! Long time coming. Three, especially the second season because my source for both seasons in the past somehow warped the second season so all the caps I got looked weirdly elongated. I now own the two seasons (series in the UK) on DVD and I found an interesting thing on Amazon recently which should facilitate this whole exercise without me having to convert the DVD-ROM on my laptop to region 2. That’ll be nice.