First up, as a reaction to my issue with Google Alerts in the previous post, I went into my settings to check and see if there was anything I could fix. Apparently I had set it on something like “only the most relevant results.” Problem was that meant I was leaving it up to Google to tell me what was relevant. And it wasn’t even doing a good job of that because it kept sending me things about that politician in Wisconsin or blog posts or news articles that only mentioned the Rory McCann we want to hear about in passing. So I thought, “ah, fuck it, send me everything,” and changed the setting. 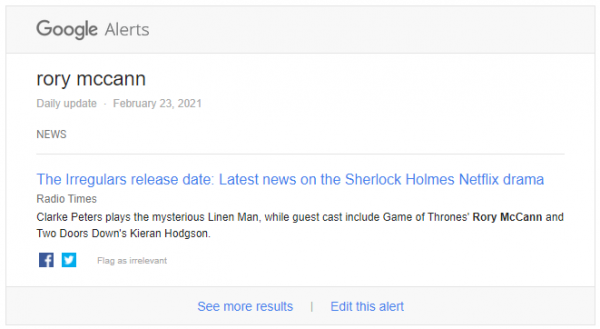 Okay. Secondly, as I also said in the previous post, I’ve started the delete process on the Facebook page. That’s going to take two weeks to finish. It’s giving me a chance to change my mind. I cannot see myself doing that, so that’s that, I guess.

I seem to still be getting messages from Instagram via the Facebook page, though; apparently, setting the page to “delete” doesn’t stop all the functions or notifications. Yay. But people seem to know they can come here to see what’s what, so that’s fine.

Instagram, you’re next. It’s been mostly my avoidant behavior keeping me away from there so far. Probably won’t be a thing much longer. Tumblr and YouTube have already been nuked, so that’ll be it and done when I get around to IG.

If you still get email, and you want to keep up with updates here, it would be worth your while to learn how RSS feeds work. If you look in the right column (or the content directly beneath this post, if you’re on your phone) at the “Stuff ‘n’ Thangs” section, which is what I renamed “Meta” because “Meta” is boring (and yes, I am a The Walking Dead fan — how’d you guess) and I may yet rename it again if I think of something better… ANYWAY, you can see a link there called Entries Feed. If you have a Feedburner account or some other RSS-reader account that’ll send your email alerts for new blog posts, that makes it easy. Of course, you also have to still be using email. Is there anyone out there who isn’t? I would think most people still have a Gmail account at least. So there you go.

Thirdly, going back over the articles in the Articles section is in progress. And can I say that I am even more weirded out by the possible recent developments over Rory’s boat? Because the way he’s talked about Wooden Boat over the past few years, you just get the ownership vibe from him, like that’s his baby and he’s so totally proud of it. The recent topics of speculation about him, this, and the relationship thing, just feel like the sun has risen on Opposite Day in the Upside-Down. Like, just totally wrong. But at the same time I realize that I don’t know him and that I am bound to be missing something. No matter how sad the facts might make me feel when they fully come to light (and they undoubtedly will come to light at some point), I’ll be relieved too because I won’t have to wonder anymore.

Be that as it may. Anyhow, it’s not necessarily easy to see my progress at this point. I had edited a few articles when I first put them up because they had glaring errors in them and I’ve had months to think about it since, and I decided I didn’t want to do it like that because I’m not the one who fucked up spellings or didn’t do the editing job properly and I’m better off just reporting the thing as I see it. So I’m basically repasting things in as they were originally presented, editing some notes or removing them entirely, and so on. There’s one piece I want to link to a note about it and I think you’ll find that interesting, so I’ll link to it in a post here when I’ve got it done.

Oh and finally, I had turned off the “do not spider” setting in the WordPress for this blog months ago. It may never wind up on the front page of Google when you search Rory’s name by itself, but it’s turning up there for certain combinations of words along with Rory’s name. So that’s cool. Be interesting to see how that all develops over time.