“Why’s she updating so often now?”

It’s no great conspiracy. What with my car being questionable I haven’t wanted to chance the brake (the squeaky one) any more than necessary.

Happily, help is on the way in, and as soon as tomorrow I might get it sorted, that whole back axle and then hopefully the front one next week. Unless it turns out I can afford to do both this week, in which case I’ll do that instead.

Room’s already paid for. Feeling pretty good about that. So I’m safe again at least until the 26th.

Meanwhile I’ve had a lot more time on my hands last few days. So that’s why you keep hearing from me. I dunno, though. If I don’t watch it, this might become a habit.

Bet you’d rather I was updating other stuff here too, though. We’ll see.

Watched Rory’s other episode in Shameless. Boy, I’ll tell you what, neither episode was what I was expecting plot-wise. Remember me talking about ambiguous characters? Well, he did it again. I thought things were going one way, and then they zagged the other direction.

I wonder if he picks those sorts of roles on purpose, or do casting directors everywhere just think he has a “keep ’em guessing” face? Guess I’ll never know.

P.S. I’m going to spoil a little bit of it for you: there’s a fantastic scene where this tiny blonde woman just over half Rory’s height is chasing him around a shop and beating on him. I don’t think it’s meant to be funny, but it sort of is all the same.

Kind of reminds me of this: 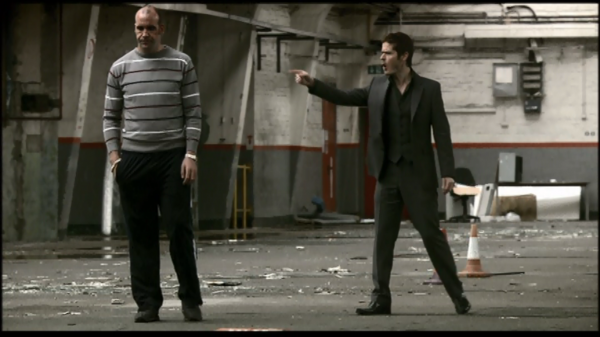 except there’s less of a size differential in this.

Remember me talking about how Rory loves to pick up new accents? And the Scottish-accent instruction tapes he sent another actor? Wonder if the big man has seen this. I’m certainly fucking impressed.

Okay, that’s about it for now. I wonder if I’ll find any other Rory stuff on Tubi. It’s a mystery!