So, as I’ve probably mentioned but can’t be fucked looking it up, I’ve been sort of casually looking for Rory stuff on Tubi, but so far had only found Season of the Witch, and I’d already seen his scene in that.

The other day I found Monarch of the Glen and got ALL excited because the bits I’ve seen of him in that, he was so stinking CUTE… and then I realized Tubi only had it starting at season five.

Okay, it wasn’t that bad. But I was disappointed. 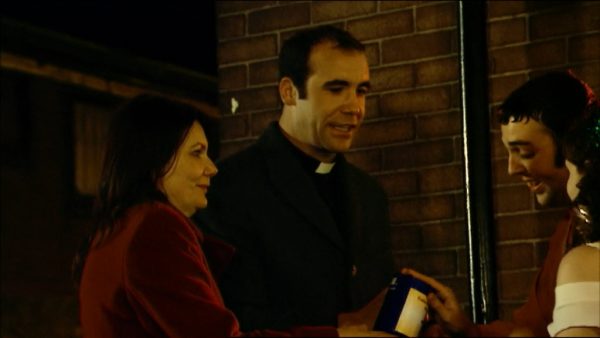 This is a UK series called Shameless. Actually I think there are two shows by that name so if you go looking, pay attention to which one you’re clicking on. You want the one that started in 2004. Rory first shows up in 2006 and he’s in a couple episodes in that (third) season. Which is there! All of it! YAY YAY YAY YAY YAY!

The back story on why we’d need a priest at all is pretty fucking funny, if a bit unrealistic (those of you with peanut allergies will spot that right away) and just the sort of thing I’d expect to see Rory in playing a priest, if we’re honest. Hahaha.

YAAAAAAAYYYYYYYYYY SOMETHING I HAVE NOT SEEN HIM IN 😍😍😍😍😍

Now I’m hoping something else shows up because I am one greedy muhfugger. Okay. Back to the show!

edit: Actually, Father Crichton being in the story is unrelated to that first scene HAHAHAHAHA. The older lady comes back into it later and it all ties together at that point, but the priest is a separate story line.

Still an interesting story and yeah, I would be inclined to watch the whole thing. It’s funny that I got into an entertainment fandom this far, though, because I am not actually a huge TV watcher. I spent most of two decades living with someone who typically has it on for noise, and our daughter’s the same way, but I could keep it off for literal hours or days and be fine. I actually have a flatscreen on the wall in my weekly-rate room and I haven’t turned it on once since February; when I do watch something it’s on my laptop, and it isn’t constant because I use my laptop for a lot of other things. If I get bored or lonely or have a specific purpose for watching, like I like a show or film and think, “hm, I’d like to see this,” or I want background noise while I knit, fine, but it isn’t the center of my life.

Even if I hadn’t gotten myself into this pickle, thus am too poor to keep buying Rory’s back catalog for a while, I would have been slow in acquiring it just for that reason.

So I hear Rory say “I don’t really watch telly” and I’m like “same, same, my dude.” I was that person in every social group drawing a blank look when someone would mention a show everyone else had seen. Even Supernatural, a show I absolutely love, I didn’t start to get into until… hm… well, a later season, anyway. Well beyond Kripke’s original five seasons. It took me a while to catch up. Same for The Walking Dead; I started in around the time they split season four, I think? Maybe later? I can’t remember. The only reason I watch more “telly” than Rory does is Rory goes camping and goes away on acting jobs. When you’re indoors more, it’s more accessible.

Anyway. Now debating whether I should go ahead and screenshot Shameless while I have access, or just put it off for a while. Frequent screenshotting interrupts watching, so I kind of have to be in a headspace for it. We’ll see.