“Holy shit,” say you Americans stopping by, “she got one in early!”

Nah. Am up late and couldn’t be bothered pretending I’d written this on Monday.

I have been rewatching NuWho. Or, I should say, “new” Doctor Who, 2005 and onward. I have… reasons… that I got started, involving the possession of about four seasons (series)’ worth of episodes on my hard drive. Ahem. I don’t know how they were acquired. No, I really don’t know, but if you would be so kind as to wait until after the first week of November this year to ask him, I’m sure my daughter’s dad would be thrilled to enlighten you. I never learned about that shit.

Not for television episodes.

ANYWAY, we’re up to Eleventh Doctor now, Matt Smith. I cannot say he is my favorite Doctor but he definitely makes top three. I don’t know how Smith pulled off Grumpy Old Man when he was literally the youngest man (excepting possibly Peter Davison?) to take on the role, but he managed it. Brilliant.

But that’s not even the point. The POINT is that there are, count ’em, TWO actors in that episode who have acted in other things with Rory McCann!

(1) Tony Curran, who was with him in Beowulf and Grendel (and there’s a quite amusing play-fight scene between the two); 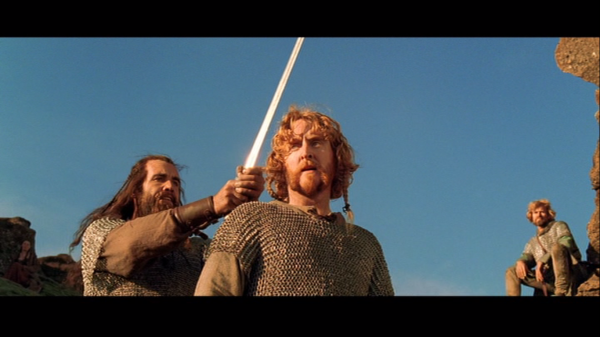 and (2) Karen Gillan, who faced off against him in Jumanji: The Next Level. 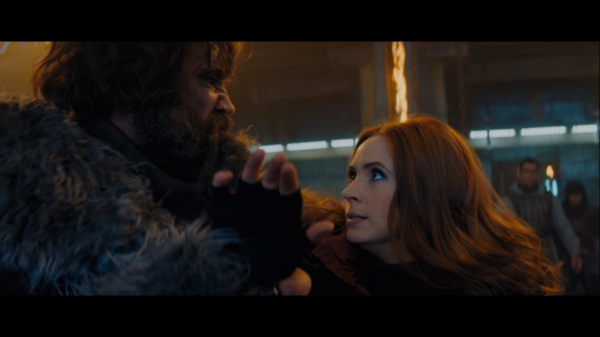 There was a little bit in “Vincent and the Doctor” that somehow I did not catch the import of, all the other umpty-billion times I have seen this episode and cried at it, in which Vincent Van Gogh remarks to Amy Pond that her accent sounds like his and, “Are you from Holland, like me?” Well, the actors are both Scottish! It’s an in-joke. I would not be surprised, in fact, if Scottish show-runner Steven Moffat made Richard Curtis, the writer, add that bit as a Scottish in-joke. Thanks to Rory getting me interested in Scotland**, in fact, I have reason to believe this is typical of Scottish humor. Y’know, when they try to be subtle. And of course, with us dumb untraveled sorts of Americans, it usually works.

Mind you, Tony Curran is from Glasgow and Karen Gillan is from Inverness (near Loch Ness) so technically they wouldn’t have THE EXACT SAME accent, in fact Glaswegians sound odd even to a lot of other Scots. But close enough, I suppose. I hadn’t even realized he was Scottish the first umpty-billion times I saw this; this time around was after three solid years’ worth of learning more about Scotland, and now I can pick up on the accents (yep, lots, not just one) more easily and of course, by this point I had seen B&G and knew that the director had grabbed a bunch of Scotsmen for the main roles. Another in-joke, I bet, as many times as Vikings had invaded Scotland centuries ago and left, erm, “presents” behind for the young women…

Meanwhile, Rory, if you’re reading this and you’ve never seen Doctor Who? Watch this one. Curran in particular is brilliant. You’ll be proud of him. (Do you ever go drinking with him anymore??? GO DRINKING WITH HIM. I bet he misses you.)

Anyway. One more thing: I don’t know if you noticed, but there’s another actor in this episode who’s also been in something with Rory McCann, though they never appeared together onscreen. See if you can spot him. There. That narrows it down a bit…