This has been an INTERESTING week.

Saturday, about halfway through the day, I started feeling feverish and occasionally would cough. It wasn’t a severe feeling and the cough wasn’t bad or frequent and, well, fall is well nigh upon us and I had just switched allergy meds (I cycle through the three major ones so as to not get too habituated to any one of them) so I thought, Oh, it’s breakthrough allergy shit, and went on with my day. Came back to my room that night, took my temp to be sure, nada. Normal.

Sunday, the feeling got worse as the day progressed and the cough got a little more frequent. About halfway through, just when I was really getting going (I had minimal contact with people, thank goodness), I started feeling tired, too, and all I could think about was going to bed and hiding under the covers. The last trip I made that day was pretty extensive, too — took me about 20-30 minutes out and the same amount of time back. You wouldn’t believe how far out some of these people are who make orders. It’s nuts. Anyway I got back to Dublin (a township/suburb in the Columbus metro area) and stopped by a store and picked up a few things, and also a COVID test. Because I really couldn’t ignore it anymore.

Got back to my room and sure enough I was showing a slight temp but more importantly, I felt like shit and really needed to go to bed.

Monster migraine Sunday night. Fucker must have lasted me a good (bad) 12-14 hours going by when I went to bed and how long I hurt after I got up.

After I’d been up a while Monday and gotten myself somewhat sorted (and was still showing a temp), I finally tested myself.

About ten seconds in, the T line showed up, and only got darker from there. I told myself it’d be a miracle if it was gone at the 15-minute mark. 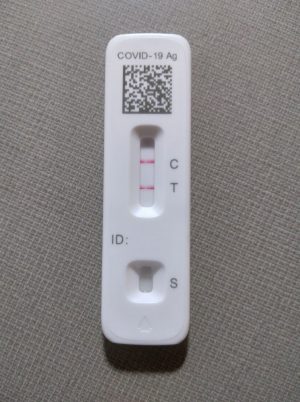 I did get myself vaccinated last year, both doses. Never got around to boosting, which means my risk of winding up in the ICU is only around 60% reduced, not 80-something percent reduced, but it’s still a pretty good reduction. So far, I don’t feel terrible. It is a lot like having a cold, except my nose isn’t stuffy or runny and I don’t have crap way down at the bottom of my lungs like sometimes I can get with colds. Also, I can still taste and smell. All these things tell me I probably picked up the Omicron variant, which doesn’t go as far down the lungs and doesn’t seem to cause as many sensory issues. And it’s milder, so that’s good too.

I’ve been taking this call-center training class at the community college and had to email the instructor and tell her why I’m not coming in for either class this week. She’s totally cool about it and is keeping me updated on what to read along with the class so I don’t fall behind. (It’s really not a difficult class so far.) I also now have the link to take their little typing-training thing, which I really don’t need but I do need documentation that I don’t need it, so it’s play along for now. I’m banished from the campus until the 17th, assuming I follow the usual trajectory and start showing negative before then and don’t get any worse, and they still want me masked when I do show back up. Fine by me. I’ve got some KN95s on the way from Amazon. I’ll be all set.

(By the way, Amazon are lying fucking liars about their “same-day delivery” bullshit. Then again, they always lie about delivery times. Oh, they’ll tell you “overnight” or “one day” or “two days” but what they really mean is that time frame after they have actually shipped, and they can ship any old damn time they like. I’m still mooching off my daughter’s dad’s Prime account — which doesn’t cost him any extra and I’ll take decent help where I can get it — or I’d be angrier. At this point, rate they’re going, though, I may never pay for Prime. Long story short, what I ordered was supposed to be overnight, and all three items met the criteria, and the total for the order was nearly twice their required minimum, and it STILL won’t get here ’til tomorrow. Tell me how this makes sense, like I’m fucking five.)

I had been about $50 away from my goal for the week and needed to tell my daughter’s dad what was up anyway in case I took a turn for the worse, so he goes, “do you need money?” and I said “$55 would be nice” because I knew he’d PayPal it and I lost my card and can’t travel to move money around anyway so I had to account for the instant-transfer fee. He sent me $300. All righty then. So that’ll be my car insurance paid up and a little bit of food money, and then probably this weekend I can deliver masked if the fever’s gone. If not, maybe we’ll revisit the whole thing. I dunno. The way he’s behaved for almost a year now I don’t believe he gives a shit about me one way or the other, and I don’t care at this point anyway, but he just found out he was exposed and he’s now having symptoms too, so maybe this is all just hitting a bit too close to home for him. That’s usually what it takes with this sort of person, I find. It is what it is.

I also find medication knocks down my fever easily and when it comes back, it’s low. The cough is annoying but not unmanageable; it doesn’t hurt and it’s not constant. Nothing else is really going on except sometimes I lose my appetite and I’m not a terribly energetic person at the best of times, but am less so this week. It is, in my case, basically like having a cold when you’re not young anymore. Hopefully it stays this mild. I hear it started out mild in lots of people who got serious later. But everything about getting on an antiviral would have cost me money I didn’t have, and I’m in a weird place in my life that does not let me be on the ACA easily. Even if I could, I can’t trust my daughter’s dad to get me my mail for when my health cards come in, or I’d have tried already. (One of the things I mean when I talk about how he’s behaved this past year. But it wasn’t a huge change in his character in the first place. Oh, whatever, I’ve droned on long enough about this already.)

Sooooo it’s basically do what I always do and white-knuckle it and hope for the best.

And knock on my head for luck.

A postscript: They estimated that 60% or more of Original COVID and Delta variant carriers have been asymptomatic and that the percentage may be even higher for Omicron. This is why we had mask mandates and this is why it all keeps spreading around so much. I probably got this from some asshole who thought he was Just Fine. Everyone’s been going around blaming the infected.

None of these conditions cause COVID by themselves. The virus still must be introduced. If you’ve been introducing it, folks? You’re not the good guys.