If Rory ever reads this post he will have to chase his eyeballs across the floor. It’s pretty much bullshit. But I ran across a funny (to me) thing and I had to share.

I follow Michael Rooker on Facebook, because I like some of the characters he’s played and he himself seems to be an interesting person, plus he actually interacts with his fans sometimes. It is less a “wish he’d say something to me” and more a “wow, he’s really cool” overall. Anyway, a few Walking Dead actors (Chad Coleman and Josh McDermitt, before he got hounded off the platform by abusive morons, and possibly one or two others I can’t recall now) have already interacted with me slightly on Facebook so if I had a pathological need for that sort of attention, I’ve already fulfilled it. No big. 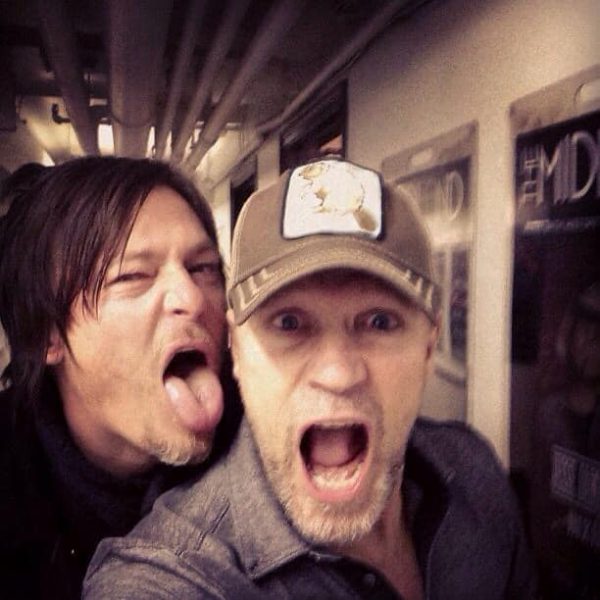 Okay, you’re thinking, he posted a photo of himself clowning with Norman Reedus. So?

I can’t assume all Rory McCann fans have seen all the photos ever posted of Rory online, so possibly you haven’t seen this photo up til now: 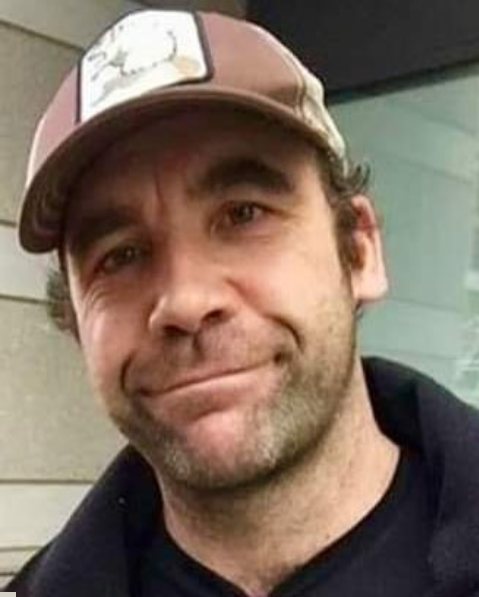 Up until I saw Rooker’s photo I thought Rory was just in a random beaver hat. Ha-ha, “beaver,” geddit? Chalked it up to Rory just has a hat collection and thought no more of it.

Seeing Rooker in THE EXACT SAME FUCKING HAT, however, got my mental cogs turning. I don’t think those two have even met; if they did, it never made the news and Rooker’s never shared about it that I’ve seen — not that I’ve seen everything but I feel, somehow, like that would have gone viral. So where’d the fucking hat come from? It’s got to mean something, or be from a specific popular place. I’ve worked in clothing retail. Specific pieces are not THAT common unless they’re branded advertisements or they become trendy.

This is a mistake, by the way, if you are not a very patient person.

But eventually my patience was rewarded.

The hat is by a company called Goorin Bros which is, by the way, given to what more conservative people would call risqué language. Not sure why, as the items themselves seem pretty tame. In fact, the shirt section alone has put me in mind of Macklemore’s famous song in which he mocks people for buying fifty-dollar t-shirts. That’s just some ignorant bitch shee-it.

The trucker hats are pretty cool, though. Unfortunately, the beaver hat is no longer available at their site. But apparently, you can still get it here.

Don’t ever say I never do nothin’ for ya.

P.S. The Rory photo is a cropping of a fan selfie. I will not go dig up the source right this minute because I have no idea what folder I put the screenshot in but if said fan sees this: sorry, dude. It’s interesting, if you go to his Instagram you can see evidence that he once posted the Rory pic (or you could last I looked, which was well over a year ago now), but the pic itself is no longer in his feed. I don’t know WTF is up with you Hound fangirls out there, but you really need to get a fucking grip.

edit: I just went back and looked at the beaver-hat listing. I had somehow missed there are words on the patches. Oh, my dude. Your sense of humor is something else. You must be an absolute riot at parties.

In other news, I did some more research on the whole car-brakes thing, and for right now I’m provisionally assuming that we’re just looking at a worn-down pad. I could get into fretting about the fact this only seems to have happened to one wheel — that’s really fucking weird. But the way it works is brake pads are deliberately designed with a metal tab that will come into metal-on-metal contact with the brake rotor when the pad’s worn down enough. The intended effect is to make a really obnoxious noise so you know you have to replace the pad. Which is fine if you have a few spare hundred to drop to replace the pads and also the rotor, which is standard procedure with pad replacements. Also you have to do it on both wheels on the same axle so that wear is even. Not that it was in this case. I wonder what that was about — did the previous owner only replace pads and rotor on one wheel? No way to know, but unless the caliper on the offending wheel is “off,” I can’t think of any other explanation. It’s not like I can control which brakes I apply from inside the car.

The worse bit is that I really should replace all four rotors and sets of pads, because the car just ticked over to 100,000 miles, and pads are supposed to be replaced roughly every 50k miles, and the front brakes are more important in the braking process than the back ones are, and if I’ve got a back one wearing down, what’s going to happen with the front ones, and when? Doesn’t bear thinking about.

Happily I think I’m going to get it sorted soon. It took some back-and-forth and bullshit, but hopefully by the end of this week. I’m also in talks with an actual job-placement agency (NOT a temp agency — I’ve had my fucking fill of temp agencies) to maybe find myself something and I have an alternate plan if that doesn’t work out so one way or another, shit’s going to improve.

Believe it or not I actually find Rory inspirational in all of this. He had it worse than I did for a while, in fact, and look at him now. I have zero desire to be an actor (occasionally I wonder how I’d do with voice acting — ask my daughter about my reading Harry Potter to her sometime) and there isn’t much else I could get into that would enact that drastic a change in my fortunes, but it’s the whole “if he got out, so can I” thing. I need that right now. I don’t have a lot else.

Good on ya, big man.