So I’m up late with laundry because the fucking piece of shit dryer I put my clothes in first turned out to be broken: it ran, but the heating element’s shot. Wasted two dollars I couldn’t really spare to find that out, but I waste money on worse, so I probably shouldn’t cry about it. (I’m not. I’m just saying, I shouldn’t in the first place.) Worse is that it takes an hour for the drying cycle to finish. It’s after 2am now, and I don’t make a habit of staying up this late anymore. I don’t know how many of you still visiting here remember my complaining about the occasional all-nighter where I couldn’t get to sleep at all and so was awake 24 hours in a row or so. Yeah, I stopped having those episodes after I left House Male’s house last September. Go figure. I thought maybe when I came back they might happen again, but no dice. Thank fuck.

Anyway. So I’m scrolling through Facebook and I run into some Glasgow page saying good morning to their followers because Glasgow is like five hours ahead of me. The photo they used to illustrate the post was of this, a famous mural in Glasgow: 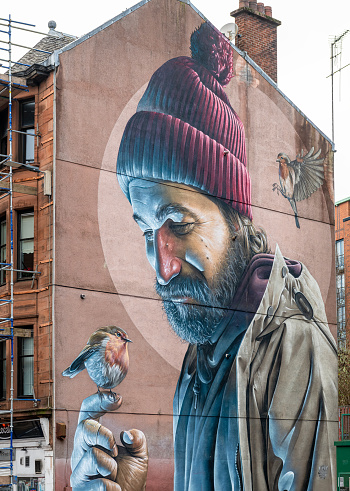 And it suddenly occurred to me that I’ve never written about this mural here.

This matters because I’ve seen pics of this mural circulated amongst Rory fandom and seen women giggling over it because ha ha it sort of looks like Rory and OH LOOK, HE’S HOLDING A LITTLE BIRD. Yeah, I know. Ha ha, what an incredible coincidence.

Problem is it isn’t Rory. If you’re familiar enough with Rory’s face it doesn’t really look like him, either. His nose is all wrong, for one thing. Sorry.

So who’s the guy in the mural? Oh… a modern interpretation of St. Mungo, the patron saint and supposed founder of the City of Glasgow. I’ve written about St. Mungo before. It was pretty funny, once you scrolled down past my angst.

Which reminds me. Recently I lurked on a conversation elsewhere on Facebook about Glen Coe (the valley; Glencoe is the town, and I never see them spelled or spaced right), which is a famous natural feature in Scotland and is at least tenuously connected to Rory because in hard times he’s sometimes lived there in a tent. Anyway people were discussing what the “Coe” bit means, and popular scuttlebutt has it that the whole name means “valley of sorrow” or “valley of mourning” or something like that because of the massacre that took place there.

However, one or two people spoke up and said something like, “actually, I heard from so-and-so who’s fluent in Gaelic that it means something more like ‘valley of dogs’.”

…Okay. My shit’s dry. Gonna go get it, put it away, and then SLEEP. I have new work starting on Monday, one of my headlights is out, and I gotta make sure I can pay for the replacement before I’m coming back from work at 10pm. Sigh.

P.S. I am hearing robins outside my window. It’s not even 3am. What the fuck?

Robins in the USA are not like robins in Europe. Ours are thrushes with fancy coloration. It’s a nice birdsong, I just… don’t want to hear it before sunrise. And yet. All damn spring and summer. Again I say: Sigh. Good night/ morning/ what the fuck ever, y’all.