Welp, that’s another Arnold Sports Festival I’ve missed, and it was right here in town. I look like the last sort of person who should attend something like that, but that sort of thing fascinates me and it wouldn’t hurt my feelings to run into Aaaaahnuld while he’s still alive and kickin’.

Inside the ASF is the Arnold Strongman Classic. Yo Rory, your “big brother” is here in town. 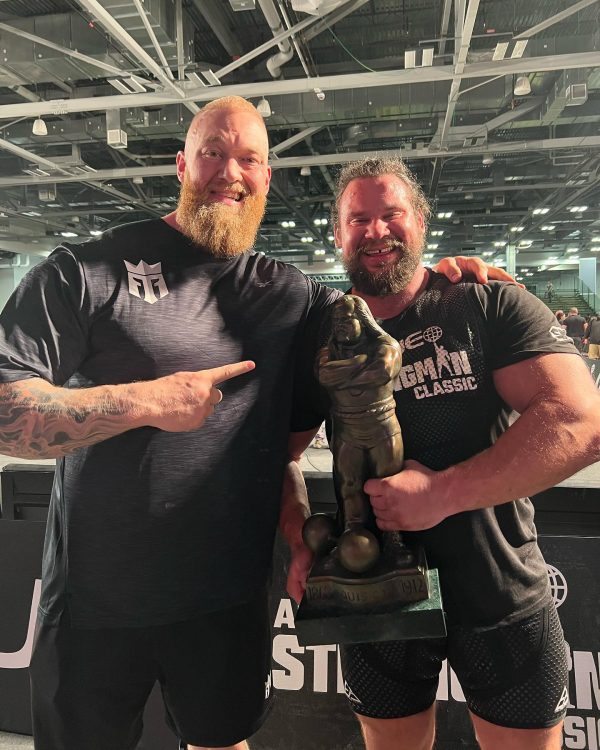 That’s this year’s winner, Martins Licis, with him on the right. But never mind him, haha.

I had figured Thor wasn’t going to be back here again as he seems to have given up the strongman stuff. I don’t quite understand all the ins and outs of this, but scuttlebutt seems to be that doing that sort of powerlifting is only safe for a few years (for some definition of “safe”) and then you start seeing negative health consequences and, well, Thor’s a new dad again (there were some issues with his older kid, who lives with her mom, who is not the current Mrs. Thor) and would probably like to stick around and watch The Hill grow up. And by the way, that is one cute little tyke. I won’t plaster his pic here, but Thor does enough of that on his own social media — go look him up. Kid is a dead ringer for him. It’s adorable.

Just popping in to share that. It always feels like three degrees away from Rory when Thor’s in town.