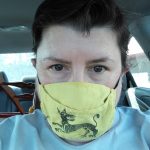 I figure down out of the way is the best place to put this page. Because this is my site, but it isn’t MY site, dig?

So… Hi! Obviously, I am the miscreant behind this site.

Here’s the bit about how I became a Rory McCann fan and here’s more info about this site generally. No need to take up extra space here.

I wasn’t sure where I would go with the fan site, but it seems to be evolving into some sort of weird career scrapbook for Rory. Works for me.

But if you’re still on this particular page, you may be after something biographical about me. I guarantee it will be boring, but I figure if I am going to go digging around in Rory’s life story, I may as well put some of mine out here. Fair’s fair.

I’m five years younger than Rory and one foot shorter, with brown hair and brown eyes. The hair’s going a bit silver, mostly up front, and I need reading glasses now.

My family’s Cajun from south Louisiana. Dad joined the Navy right out of high school and so I was born in Europe (southern Spain, in fact). I’ve lived in three countries, including the USA, and several U.S. states in three different regions. Lived in Ohio the longest of anywhere. Tried to leave again, twice, and wound up right back here. Beginning to understand why we’ve sent so many astronauts into space, one all the way to the fucking moon.

Like a certain tall man we all love, I am an introvert, like rock music and animals (he’s a dog person — was even before Game of Thrones — and I’m more about cats), and am interested in old-fashioned technology. I am not as much an outdoor person, but I’m not against it, as long as it’s not too hot or buggy.

Had three half-brothers growing up (one passed away in 2010) and have had two kids, one now in his mid-20s and the other a new-minted adult as of 2022.

I’m a caffeine addict and occasionally drink a little (I find I like mildly peaty “Scotch,” but it’s expensive), and I suppose I’m a little bit of an internet addict, though I’d be less of one if I had a life. And that’s about it on vices. I’m pretty dull.

And there you go.

…What? You were expecting more? Well, that’s shaping up here. In case you need a sleep aid.